Here is an excellent article on ADHD in an aging brain:

Inside the Aging ADHD Brain

I specialize in assessing ADHD in adults and offer ADHD counseling. I see in my practice “a growing number of older adults who are being diagnosed with ADHD at 40, 50, 60, and beyond. Clinicians report a steady increase in requests for ADHD testing by bewildered yet determined adults who grew up in the 1940s, 1950s, and 1960s, when ADHD was rarely recognized in children, let alone adults.”

“There is a lack of hard data on the aging ADHD population. Most researchers are reluctant to add the confounding factor of age (50+) to ADHD studies. A few pioneering studies from around the world indicate that the prevalence of ADHD among older adults (ages 45-85) is probably about 3 percent, slightly lower than the estimated 4.4 percent prevalence among adults up to age 44. The prevalence for children is estimated at 8 to 9 percent.”

“Identifying ADHD can be tricky at any age. There is no blood test or brain scan that reveals latent ADHD. Instead, behavioral markers gathered through in-depth intake interviews are the gold standard for clinicians evaluating ADHD (as well as other psychological disorders). For a clinical diagnosis of ADHD, the Diagnostic and Statistical Manual of Mental Disorders (DSM-5) requires six impairing symptoms in children and adolescents age 17 and younger. For adults over the age of 17, only five symptoms are required. ADHD may present differently in old age, leading some researchers to suggest that even fewer symptoms might be appropriate for diagnoses of the 40-plus crowd.”

“It is challenging to evaluate older adults for ADHD because the normal aging process mimics some classic ADHD symptoms. ADHD symptoms, in turn, overlap with some telltale signals of mild cognitive impairment and early dementia. A clinician has her hands full sorting out the differences.”

“Many executive functions diminish as we age — inhibiting our responses (thinking before we act) and our reactions to motor stimuli (safely driving a car). Geriatric researchers report a higher incidence of driving accidents among older adults, some attributed to normal aging, others to dementia, poor vision, medical problems, and/or medications.”

“Working memory glitches plague virtually all adults with ADHD, as do attention issues. A 2014 study showed that drivers with ADHD were 50 percent more likely to be involved in a serious car crash, although the researchers excluded adults over the age of 46. Executive function — planning, organization, follow-through, and time awareness — is a continuing challenge for children and adults with ADHD. Adults with the condition misplace things, and have trouble with attention and keeping up in conversations.”

“Complicating a later-life diagnosis for women is the influence of a powerful female hormone, estradiol, one of three estrogens active in women’s bodies. Estrogen/estradiol acts as the strong supporting cast in the brain to sensitize neural receptors to make better connections between key neurotransmitters: norepinephrine and dopamine. Norepinephrine and dopamine help maintain alertness, focus, and motivation.” 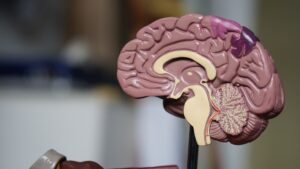 “…many women are diagnosed with ADHD in their late 30s or 40s during perimenopause, the years before actual menopause. At perimenopause, estrogen abandons its regular monthly ebb and flow and does an erratic fan dance. As time goes on, estrogen goes missing more often, bringing ADHD symptoms front and center.”

“Estrogen therapy has proven successful in treating ADHD symptoms at menopause, according to Quinn. ‘The sooner you start estrogen therapy, the greater the effect on cognitive decline,’ she said. For women with ADHD, she recommends ‘unopposed estrogen’, since progesterone has a negative effect on focus. She cautions that women should add in a course of a progestin at regular intervals to protect against uterine cancer. Postmenopausal ADHD women should consult their doctors about continuing hormone therapy, especially those with a history of vascular problems or cancer.”

“Finding out about ADHD at midlife or older can be devastating, or it can open doors to long-discarded dreams. ‘To have ADHD as long as I have had it, to carry that with your aspirations and dreams is very painful,’ said Zophia, now 72 years old. ‘But that strong desire to make a difference in the world has been reawakened. I’m not going to give up. To my last breath, I will move toward my goals!'”

Elaine Korngold, LPC in Oregon, offers a detailed executive function assessment to clients with ADHD and an aging brain to determine which functions are impaired and collaboratively develops a specific treatment plan to focus on improvements. Elaine integrates Brainspotting and Internal Family Systems therapies to help clients process life-long distress or negative cognitions they carry as a result of living with undiagnosed ADHD. Contact Elaine to learn more.