Adult clients with ADHD had often experienced trauma in the past, especially if their ADHD was not diagnosed until adulthood. Just having an undiagnosed ADHD in childhood can result in many traumatic experiences, such as feelings of inadequacy, or not understanding why sometimes you can perform well, and other times – not.

The article below describes the relationship between ADHD and trauma, and how the two might be similar or different.

Trauma Growing Up With ADHD

“ADHD is a mental health condition typically characterized by inattentive, hyperactive, or impulsive behavior. On the other hand, trauma is a mental, emotional, or physical response to a shocking or distressing event or series of stressful events.”

“… potential bullying from peers over social difficulties resulting from ADHD symptoms increases the risk of:

“…because ADHD is a neurodevelopmental condition, trauma that occurs later in life is unlikely to cause ADHD.”

Prevalence of PTSD in Adults with ADHD

According to another study, “lifetime prevalence of PTSD was much higher among adults with ADHD, compared with those without the condition.”

“PTSD symptoms can include:

Some of these can present within people with ADHD, too.”

“… severe trauma can worsen preexisting aggressive or impulsive behaviors in children with hyperactive-impulsive attention deficit. It can also lead to further problems with sleep, which people diagnosed with ADHD (or misdiagnosed with ADHD) already experience.” 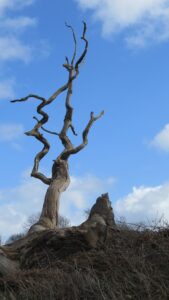 Common Symptoms Between ADHD and Trauma

“… experts suggest that trauma and Attention Deficit/Hyperactivity Disorder have the following symptoms in common:

“On the other hand, symptoms usually unique to trauma are:

How Elaine Korngold Can Help

Elaine Korngold, LPC in Oregon, offers ADHD counseling and helps adults heal from past trauma using a combination of approaches that include Brainspotting therapy and Internal Family Systems therapy. Elaine is certified in trauma and ADHD counseling, contact her to learn more.